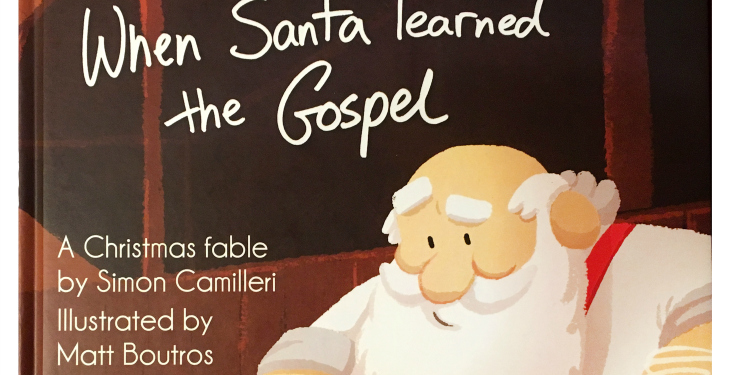 Simon Camilleri is the second of our spotlight posts on Australian authors.

What has been your journey towards writing?

Since deciding to follow Jesus in my teens, I have always had a passion for using my creative skills to share Jesus with people. I had a love for theatre and began studying it at University and so that was for me the most natural place to start. I began by writing Christian plays and directing them at University.  That led eventually to discovering the wonderful art of biblical storytelling – where I would commit to memory chapters of Scripture. Then using my theatre experience I would present the text as I would a theatrical performance. In 2002, I began a theatre group called The Backyard Bard through which I trained other storytellers. I performed in churches and schools, and staged large and small scale productions of entire books of the bible.

As well as doing this, I also grew a love of graphic design, music, illustration, poetry, short stories, song writing and magic tricks. I’ve always been a bit of a “Jack of many trades and master of none.” The good thing about that is that over the years this has given me many opportunities to communicate the gospel through different creative means.

However, eventually you have branched more into writing, how has that happened?

In 2010, I started a blog which became a great outlet for my creativity and reflections on life and theology. On occasion I would make up and publish poems – some silly and humorous, some deep and spiritual. In December 2013 I published a poem that struck both of these chords.

I wrote “When Santa Learned the Gospel” as a sort of commentary on the modern commercial version of Santa and the message that I saw that he taught to kids. My concern was with the moralistic philosophy that good gifts come to those who are “good” and only bad comes to those who are “naughty.” The problem is not only that this is Santa’s message but it was also how many think about Christianity.

I wanted to write something that explained the true gospel of grace and contrasted it with the fake “gospel” that the Santa myth promoted. Now, I could have done this in a heavy, theological article but instead I had the idea to do something a little more fun. What if Santa was confronted with the truth of the gospel? What if I wrote a poem where Santa wasn’t the villain – he was the protagonist? And so, we as the reader followed his spiritual journey of reflection and redemption.

Well, with this inspiration in mind, I sat down and wrote the poem in one sitting. I posted it on my blog and on Facebook. Little did I know it would capture the imagination of so many other Christians. It was viewed and shared nearly 20,000 times. Ministers were even reading it as part of their Christmas services! I knew it must be something a bit special and so I decided that I should consider turning it into an illustrated children’s book.

How have you gone from blog to book?

It took nearly three years to find the right illustrator. But now I realize I needed the time to develop the book properly.

I haven’t found a publisher as yet. A year or two ago, I approached a few publishers but I got knocked back. This was understandable at that stage as I didn’t have much to show them. A book combining both the good news and Santa has been a tricky idea to sell. If I don’t find a publisher, I am also quite happy to self-publish as I can see the demand for this book is out there. There is a distinct lack of good Christian books that critique Santa and explain the gospel, and definitely none that I have found that do it in a warm and engaging way.

Doing it myself has it’s challenges. I recently ran a Kickstarter campaign which showed us people’s level of interest in the project. That reached the first goal in 48 hours and went on to raise more money towards long term dreams.

So what are some of your long term dreams for this project?

My long term dreams for this project include far more than simply publishing the book.

*To provide a gospel-resource for Christians who are looking for interesting and creative ways of introducing their friends to Jesus.

*That parents will read the book to their children and talk with them about the gospel.

*That Christians will choose this book as a Christmas gift to family and friends who don’t know much about Christianity.

* And churches and schools will use this story at Christmastime. We’d love to see it used in Community Carols Events. With this in mind I plan to develop resources to help Christian groups use it in these ways!

CD Are you interested in supporting more Australian writers? Sign up for the RSS feed and ensure you are alerted to new posts.