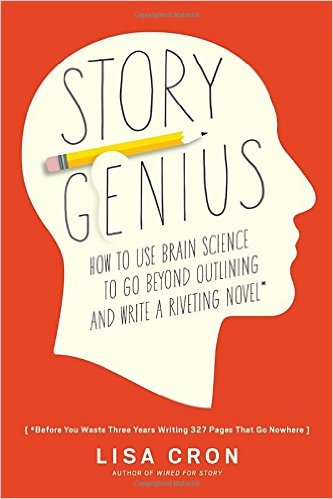 I have just read a brilliant (5 star) book. Next time I plan a novel I will be using Lisa Cron’s method from her new book ‘Story Genius’

Here are some of the points she made that I found so helpful.

The ‘why’ it happened and ‘why’ it matters is very important. The reader’s question is, ‘if this happened to me, how would I handle it? How can I learn from what the protagonist goes through?”

There are many other helpful points but what Lisa goes on to demonstrate how the writer should start to plan the story (as opposed to the plot).

The problem with reading this kind of book when I’m nearly finished editing my novel is that I became terrified that I was going to have to rewrite the whole thing. In the end I didn’t need to but the exercises I did (and which I’ll do as the first stage in the future) was to write 4 scenes for the protagonist.

Why do they have this misbelief? What scene in the past (and it doesn’t have to be a big thing) became the ‘lens’ through which they see the world? What you want is the specific memory that will slap her in the face/remember when she’s faced with the problem.

Scene 1 – write in the ‘first person’ even if in the future the novel will be in third person.

Ask yourself – what happened in the past that formed the protagonists wrong view of the world? What are the fears they don’t want to confront? What are the long held desires they’ve never dared to go for? Why?

So I wrote a scene with my character as a three year old and the horrible experience she had that day and the way she interpreted it. For it was her interpretation that meant that it would become a problem in the future.

Scenes 2-4 – three more scenes between the initial point and the point where the novel will start. Three scenes which bring up her fears and her issue and three times that she backs down because of the lie she believes in.

I had a great time doing this. It really helped me get to know my character. In my final edit, I was able to use snippets from all these scenes I wrote.

People want to stay in equilibrium. We don’t like change so what external event/problem will come up against the lie they believe in? It has to be a problem that isn’t easily solved and has many ramifications and to have a ‘ticking clock’ feel about it.

3 questions to ask:
1. Will the protagonist achieve her external goal?

Lisa explains her card system and how she actually plans the novel. All the way through the book we follow one single example of someone putting each step into practice.
Card system
Scene #
Alpha Point
– Sub Point
– sub point

Then 4 boxes: (external things on top row and internal below)

And so? (what drives us on to read the next chapter)

I look forward to using this method next time to plot my novel.